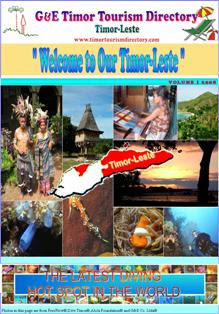 At last, the first edition of the G and E Timor Tourism Directory is available to purchase in book form. It’s a truly comprehensive, 200-page directory to every tourism-related business in all 13 of Timor Leste’s districts, from mini-marts and restaurants to accommodation, tour operators, scuba diving centres, beauty salons hair salono. As well as business and local authority listings, the directory has page after page of useful background information for the traveller about Timor Leste’s people, culture, traditions and history. The guide is full of colourful photos of the country’s attractions on land as well as underwater. Ideal for new expat residents. Retail price $20 – on sale at FreeFlow dive centre, Pantai Kelapa or from Hotel Dili, Lecidere. Also, the directory is currently being loaded onto a website. It’s still under construction but for a preview check out the link: http://www.timortourismdirectory.com/index.html.
Posted by attl veep at 3:14 AM 12 comments:

Come diving in Timor Leste - The Amazon of the Seas

The press release below states what we've always known here - Timor Leste has some of the world's best diving. It also has two excellent dive centres:
Dive Timor Lorosae (http://www.divetimor.com/)
and FreeFlow (http://www.freeflowdiving.com)/
Come over and see for yourself - this is the best time of year for it!

SYDNEY, AUSTRALIA — September 10, 2007 — At yesterday's Asia Pacific
Economic Cooperation (APEC) summit, 21 world leaders endorsed a new
proposal to safeguard the rich marine resources of the Indo-Pacific
region for future generations. The Coral Triangle Initiative (CTI) on
Coral Reefs, Fisheries, and Food Security aims to bring together six
governments in a multilateral partnership to conserve the
extraordinary marine life in the region. The proposal was endorsed in
the Sydney APEC Leaders' Declaration on Climate Change, Energy
Security and Clean Development. U.S. President George W. Bush welcomed
this Initiative during the Summit.

The Coral Triangle (CT) covers all or parts of the exclusive economic
zones of Indonesia (Central and Eastern), East Timor, the Philippines,
Malaysia (part of Borneo), Papua New Guinea and the Solomon Islands.
Defined by areas containing 500 or more species of coral, the Coral
Triangle, sometimes referred to as the "Amazon of the Seas", is the
epicenter of marine life abundance and diversity on the planet. It has
more than 600 coral species in some areas (more than 75% of all known
coral species), 53% of the world's coral reefs, 3,000 fish species,
and the greatest extent of mangrove forests of any region in the world.

Rebecca Patton, Chief Conservation Strategies Officer with The Nature
Conservancy, and WWF US's Chief Conservation Officer, Ginette Hemley,
praised the endorsement of this new initiative. "The Coral Triangle
Initiative is an incredible step forward for conservation. The
protection of these coral reefs and the life they support will help
our planet cope with a changing climate and ensure the livelihoods for
well over 100 million people," noted Patton. "The initiative shown by
the APEC economies is to be applauded," Hemley added.

The biological resources of the Coral Triangle directly sustain the
lives of over 120 million people living within this area, and benefit
millions more worldwide. Primary human benefits include:

* Livelihoods, income, and food security -- particularly for
populations living along coastlines within the region
* Total annual value of coral reefs, mangroves & associated
natural habitats within the CT are estimated at US $2.3 billion
* Tuna spawning & nursery grounds support a multi-billion tuna
industry, and provide for millions of consumers worldwide
* Healthy marine resources contribute to a growing nature-based
tourism industry in the region
* Healthy reefs systems and mangroves protect coastal communities
from storms and tsunamis, reducing future reconstruction costs and the
need for international aid


Possible linkages between the CTI and climate change were highlighted
during the APEC Summit. As part of a comprehensive approach to
climate change, the future impacts of climate change on our marine and
coastal natural resources must be addressed in addition to significant
reductions in emissions. Adaptation actions that can help to protect
and sustain these resources, such as creating networks of marine
reserves that are effectively designed for resilience to climate
change, would be a central element of the CTI and essential to the
human communities who depend on these resources.

The Nature Conservancy is a leading conservation organization working
around the world to protect ecologically important lands and waters
for nature and people. To date, the Conservancy and its more than one
million members have been responsible for the protection of more than
15 million acres in the United States and have helped preserve more
than 102 million acres in Latin America, the Caribbean, Asia and the
Pacific. Visit The Nature Conservancy on the Web at www.nature.org.

About World Wildlife Fund
Known in the United States as World Wildlife Fund and recognized
worldwide by its panda logo, WWF leads international efforts to
protect endangered species and their habitats and to conserve the
diversity of life on Earth. Now in its fifth decade, WWF, the global
conservation organization, works in more than 100 countries around the
world.
Posted by attl veep at 7:41 PM 4 comments:

Greetings from the Embassy of the Democratic Republic of Timor-Leste in Beijing, China

After our successful participation at Beijing International Tourism Expo (BITE 2007) in June 21 – 23, 2007 in promoting Timor-Leste and its tourism sector, the Embassy of the Democratic Republic of Timor-Leste in Beijing, China will be participating in China (Nanchang) International Eco-tourism Exhibition and Award Tourism Conference, which will be held from 21 – 23 October 2007. The event’s primary focus is on eco-tourism.

For the event, we are going to produce a booklet containing information from tourism operators from Timor-Leste and their packages on offer.

We are at the final stage of compiling the necessary information and we will commence printing the booklet soon, which will be widely distributed, during the event, to the participating travel agents and potential Chinese visitors to Timor-Leste.

This year's Pacific and Asia Travel Association Travel Mart is handily taking place in Bali this year, so we are sending a solid delegation to the show - including the new Minister of Tourism, Commerce and Industry, Mr Gil Alves - to promote our fledgling tourism industry.
We have received requests from 40 different companies (buyers) from all over the world to meet Timor Leste's representatives, which is very encouraging. We will also be requesting appointments with a number of other companies specialising in our kind of tourism - ie adventure travel, nature, diving, cultural, etc. We have also requested a meeting with the Bali Tourism Association so that we can discuss bilateral relations and cross-marketing.

I will post the full list of the companies that we will meet as soon as it is confirmed, in case any members want to contact companies directly with details of what they have to offer. ATTL will represent those tourism operators who are not attending the show. Please email me with any specific requests you may have. We will be needing 300-500 copies of companies' brochures to hand out in our "goody bag", which will contain the CD Rom and the general Turismo Timor Leste brochures. Please drop off what you have either at FreeFlow, Hotel Dili or the Directorate of Tourism in Fomento building. If any ATTL members need help with making up their brochures, email me and I will assist as best I can.
Best regards
ATTL Veep


From the Directorate of Tourism

We are writing to you today with an update on our PTM2007, September 25-28, at Bali International Convention Centre, Bali, Indonesia.

We are pleased that all our 349 registered primary Buyers have agreed to undertake an independent set of business calendar to meet, network, negotiate and contract with our PTM2007 Sellers.

After feedback and requests from our Sellers, efforts will be made to visibly distinguish the region source and business profile of all our buyer delegates on-site during the mart with colourful ribbons tagged to their delegate badges.

Further, we have endeavoured to visibly identify "first time PTM buyers" in the Buyer Advance Guide sent to you.

Sellers: This year's Mart sees a total net floor area of 4,294 square metres occupied by Sellers at the BICC. Macau SAR and the Pacific islands are coming back to the Mart with even bigger representations this year. And India is maintaining the biggest country pavilion, standing huge at 162 square metres.

This year Tourism Timor Leste will attend at PATA Expo ( Seller ) and Board of Director Meeting.

The Purpose of our participations are: To promote Tourism Timor Leste and Looking for cooperation opportunities and to recover post conflict.

For the Programs Please visit www.PATA.org/smart

The Timor Leste Government's Directorate of Tourism has received stocks of a wonderful, updated tourism information CD-ROM, prepared by the Portuguese NGO Gertil. Entitled "Turismo in Timor - Eastern Paradise", it has interactive maps that enable you to travel virtually around the country, clicking on destinations to see photos and video. There's also some nice traditional Timorese music on it. This is what gets handed out at trade shows such as PATA. If you'd like a copy, or several to hand out to your guests, either contact the Tourism Directorate or pick them up at FreeFlow Dive Centre.
Posted by attl veep at 7:59 PM No comments:

Follow this link for another story about East Timor's tourism potential, "Rewards Await in East Timor", this time from South Asian Post, at http://www.southasianpost.com/portal2/ff808081145157fb01145175d2130007_East_timor.do.html We are really starting to build a reputation for being one of Asia's most exciting new holiday destinations.
Viva Rai Doben!
Posted by attl veep at 4:39 PM No comments: 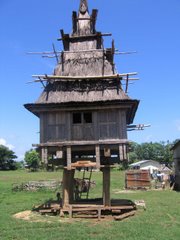 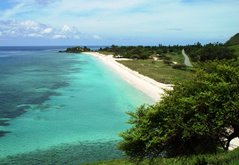 What is the currency of East Timor (Timor Leste)? The U.S. dollar. Notes are identical to United States currency, but Timor Leste has its own coins, worth the same as U.S. cents, called "centavos".